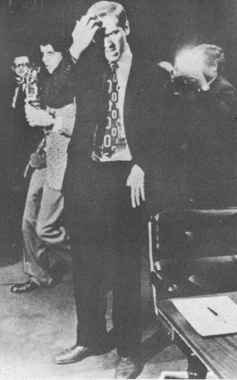 Angry voices rattled the door to Bobby Fischer's hotel room as I raised my hand to knock. "Goddammit, I'm sick of it!" I heard Bobby shouting. "I'm sick of seeing people! I got to work, I got to rest! Why didn't you ask me before you set up all those appointments? To hell with them!" Then I heard the mild and dignified executive director of the U.S. Chess Federation addressing the man who may well be the greatest chess player in world history in a tone just slightly lower than a yell: "Bobby, ever since we came to Buenos Aires I've done nothing but take care of you, day and night. You ungrateful ---!"

It was 3 p.m., a bit early for Fischer to be up. Ten minutes later, finding the hall silent, I risked a knock and Fischer cracked the door. "Oh yeah, the guy from LIFE. Come on in." His smile was broad and boyish but his eyes were wary. Tall, wide and flat, with a head too small for his big body, he put me in mind of a pale transhuman sculpture by Henry Moore. I had seen him twice before but never so tired.

posted by ChessManiac.com Team Member at 1:41 AM