At the age of twelve and seven month, Sergey Karyakin, born in Simpheropol (Crimea, Ukraine), has become the youngest International Grand Master in the world. 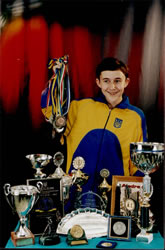 Nowadays Karjakin is welcomed for the most prestigous chess tournaments. He has lucky to pass both and most: 'the autumn examination session' in November of 2003 he placed forth place being the strongest by its staff on the championship in the Ukraine and fifth place in the Spanish town of Benidorm. Only the names of the testmakers-participants would take one's breath away: Vishi Anand (India), Veselin Topalov (Bulgaria), Judit Polgar (Hungary) and others. Sergey has successfully played on AEROFLOT OPEN 2004. He got 6 points from 9 possible - which is an excellent result for such a strong tournament. He placed second at the open tournament, which was held in Dos-Ermanes, Spain (153 participants) on March, 2004. According to his plans, Sergey now is taking part in the World championship in Tripoli, Libya. After the World championship he is going to take part in international tournament in Dortmund, Germany on July, 2004 in one group with famous players such as: V.Kramnik, P.Leko and V.Bologan.
I’ve met the father of young talent and asked to answer a few questions:
-Alexander Ivanovich, will you tell our readers the reason why your son has got to the life he is having how?
But for chess, Serge went in for different kinds of sports. He went on swimming, acrobatics, lawn tennis, the English Language and even stucco moulding works. There was no special attention towards chess game.
That was made just for self-made child.
And what did happen then?
- That was a shock for many of the men. Serge began to show good sport results on different chess tournaments:
has become a champion of the Crimea ( for those who are under eight ), at the same age he’d got the second place in the championship of the Ukraine ( for these who are under 10 ) and the next year he had become the Champion of the Ukraine. After which there were wins to follow: on the Championship of Europe, and in 2001 Serge had become a World Champion at the age for the category group of 12.
- In the Chess world Sergey Korjakin is called as Robertino Loretty.
What is his attitude to his own popularity?
He would never call himself a Star with just no time to do it., and he records journalist respect. The question when he began to play chess is getting on his nerves.
But the way, does your wife play chess?
Neither my wife, nor I never this game. To tell the truth, how Serges mother is a manager- she watches for training and for getting school-tasks ready.
On International tournaments abroad as I know the chessmen speak to each other in English…
The French Club ”NAO”, for who Serge stands now, constantly invite for study-training gatherings for their pupils the Leading Grand Masters and trainers, who take the courses on the English Language. So, it means, no way out ( Nowhere to be hidden)- if you want to advance in chess playing you’ve got to study English!
Will you tell me about daily routine of Serge?
Daily training takes him about six hours plus an hour and a half to study English with a teacher. Nothing to speak of physical training.
-And how does your son cope to study at secondary school?
Participation in different tournaments, study with coach and English takes a lot of time; for this reason Serge has free attending of classes now.
And in which way does the Koryjakins spare their free- time?
Serge likes to communicate with his friends, play strategic computer games, especially “ Heroes”. Being abroad he spends every spare minute for sightseeing’s in new places. There are also some favorite places , - it is Spanish town Benidorm with its highest hotels in Europe.
What are Serge’s favorite subjects at school?
Sometimes they consider that if a child goes in for chess he must be “ a mathematician”.
Recently I “ slipped” Serge school text-book in History. He “ swallowed” it within one day.
- Do you mean, that on this stage it is necessary for him in the first place to be engaged in chess-playing, but not in school studying, because it could be made up later?
In one of the issues of popular publication of periodical “64’ there was an article about young talents, in which Anatoliy Karpov mentioned that talented youth needs so-called “ American approach”: if anything goes well with your child you ve got to occupy him with this very matter.
Alexander Ivanovich and now comes the last question: How does chess-playing effect on mental and physical development of Serge?
Again I m going to answer your question with the words of the second chess champion of the world Ummanuel Lasker, who said, that “… chess is a small model of life”. This means, that studying chess we study life unwittingly. And as they say life would teach you everything.