first learning to play online chess, most people quickly learn that an attack against one piece can be dealt with in various ways. This is why double attacks are so strong. They force the enemy to lose something (usually the less valuable piece). I consider forks to be double attacks as well, but due to the many, many ways the different pieces can accomplish them, and their popularity on the online chess board, I gave them a whole article all to themselves. Most, if not all, of the positions in this article will be a double attack called a discovered attack. Let's take a look at the first position: 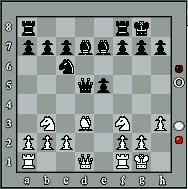 It's white to move and I bet you already found the right move. 1. Bxh7+! Kxh7 2. Qxd5 and white should go on to an easy win. Lets take a look at a similar position from one of my own games. Trajan vs Cvrclek-chessmaniac.com


Blacks last move was Qxd4?? picking up a pawn. I clearly see that I have a possible discovered attack threat on the queen, so i use this to my advantage. 1. Rxe6+! (and I win the pawn, with the idea of 1. ... Kd8 2. Nxf7+ Kc8 3. Nxh8). However, black did not see the discovered attack and played 1. ... fxe6 2. Bg6+ and black resigned because of the inevitable loss of the queen. Discovered checks can be quite deadly too,


I'm sure you already see 1. Ne4+ picking up the black queen. This next example is from a study done by A. Troitzky in 1896:


It's White's move and he would really like to queen the pawn, however black's rook has other ideas for that pawn. Can you figure out a winning line for white? 1. Rc8! now if 1. ... Rxa7 2. Kb6+ wins the rook and later the game. Any other move fails black as well. Here's another position, this one's from Maric-Gligoric, Belgrade, 1962:


What are you thinking? That White may be up a knight, but its trapped and when the black king gets to g3 its lost? It's a good thing that its whites move then. 1. Bc7 Kg3 2. Ng6 Bxg6 3. f5+(threatening both king and bishop) Kg4 4.fxg6 and it goes on to queen.

People miss this sort of tactic all the time, be on the look out for them and maybe next time your playing online chess you can snatch victory from the jaws of defeat.

posted by ChessManiac.com Team Member at Monday, May 15, 2006

If you have a website or a homepage, feel free to link to ChessManiac using these links:

SpringWidgets
RSS Reader
This widget is the staple of our platform. Read all your feeds right here with this one widget - Supported feeds are OPML, RSS, RDF, ATOM. Watch your favorite Podcast in the embedded Video Player on the Desktop or publish your own video playlist to your site for others to view!