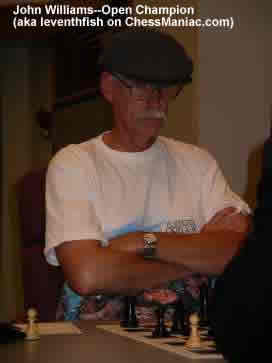 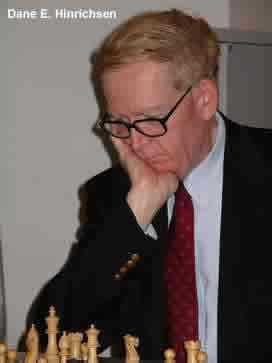 The San Luis Obispo County Chess Championships were held August 14th and 15th, 2004 at Cuesta College. Twenty participants faced off in the four round State Chess Championship qualifier. The tournament started at 11:00 a.m. sharp and did not finish until 7:30 p.m. Sunday evening.

Approximately 40 games of chess were played. John Williams (aka Leventhfish on ChessManiac.com) swept the Open Section with a perfect score of 4. Scott Mason placed second and Cuesta College Math Instructor and Chess Club advisor Matthew Robertson, placed third. Thanks to Mr. Robertson and Cuesta College for allowing the San Luis Obispo Chess Club to conduct this tournament at their site.

The reserve section was a very tight race. In this section, Howard Gaxiola

tied with Todd J Dougherty with a score of 3. The USCF tiebreak system was used to break the tie and Mr. Gaxiola was crowned San Luis Obispo Reserve Chess Champion. Taking 2nd place was San Luis Obispo resident Todd J Dougherty and Kevin Maxwell, who was favored to win the Reserve Championship, had to give up his title and settle for 3rd place. It was rumored that Mr. Maxwell had recently changed his playing style after reading the Art of Attack in Chess. It would seem that the attacking style does not fit with Mr. Maxwell's style of play.

Club Treasurer Barbara McCaleb gave up her chance to play in order to help organize the tournament. Mrs. McCaleb is the driving force behind the success of the San Luis Obispo Chess Club. Without her time and dedication there would not be a chess club for San Luis Obispo residents.

KSBY dropped by and actually showed a small segment on the channel 6 news.

Please check the website for the next chess tournament announcement which should be sometime in November or December.