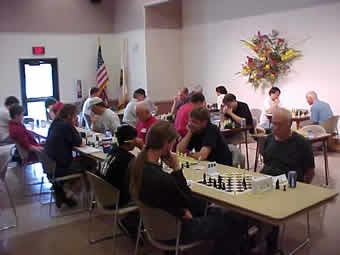 See results and photo album! The Paso Robles Spring Chess Open was held May 15, 2004 at the Paso Robles Senior Center. Thirty participants faced off in the four round state chess championship qualifier. The tournament started at 10:00 a.m. sharp and did not finish until 7:30 p.m. The new Paso Robles Chess Club President, Irwin Friedman(Aka FIZFRIED at ChessManiac.com), was announced. 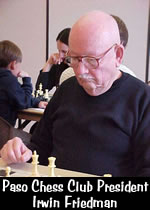 Friedman has served as club treasurer for the last year and stated, "This is the first time I have been president of anything and I'm going to enjoy every minute of it."

Approximately 60 games of chess were played. It was a struggle for first place in the Open section with many close games. The competition was very competitive as the winner of the Open section would qualify for a seat at the Southern California Chess Championships. San Luis Obispo Chess Club President, Warren Williamson, went for that seat as he was paired with the top player in the tournament in the final round. Even though Mr. Williamson had just competed in the Team K-Man Triathalon in which he placed 4th, he still showed up for the tournament to take a shot at the State Championship Seat. However, he had to sucomb to USC student, Danyul Lawrence, who won the tournament with a perfect score. 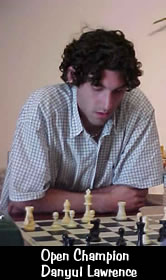 The under 1500 rated reserve section was also a tight race. In this section, Kevin Maxwell 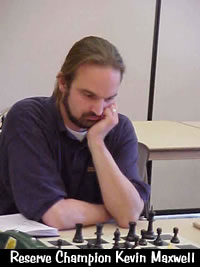 Maria Kelly not only played in the tournament but volunteered her time to prepare a continental breakfast,lunch and a wonderful barbecue chicken dinner for the chess players.

The San Luis Obispo County Chess Championships is scheduled to take place on Saturday and Sunday August 14th and 15th, 2004. The format will be slightly different with 2 sections, an Open and an Reserve U1500 section. The tournament will be game in two hours. This tournament will also be a California State Championship Qualifier with 6 Grand Prix points available. This should help to bring in more opponents from out of the area. SanLuis Obispo County Chess Championships
Special thanks to the Paso Robles Senior Center for allowing the Paso Robles Chess Club to use their facilities for the tournament. The Paso Robles Chess Club meets at the Senior Center Wednesday nights from 6:30 p.m. until 9:00 p.m. The club is open to all ages. For more information contact President Irwin Friedman at 238-3668 or visit the Paso Robles Chess Club web site at www.chessmaniac.com/pasoclub.